"I am excited and honored to produce the new PEOPLE (the TV Show!)," said Rob Silverstein, executive producer/showrunner. "I have been in the industry for 30 years; this on-air team, led by hosts Kay Adams and Lawrence K. Jackson, along with correspondents Jeremy Parsons and Sandra Vergara, will bring a fresh, smart, fun, and dynamic take to the genre and will do a fantastic job representing the iconic PEOPLE brand."

"PEOPLE is the most trusted brand in celebrity news. I'm thrilled to bring the PEOPLE newsroom to life for viewers across the country, whether at home or on-the-go," said Adams.  "I am eager to be part of the on-air team that will bring the credibility of the magazine that you know, to an entirely new platform," added Jackson.

Adams is host of NFL Network's Emmy-nominated morning show, Good Morning Football, and most recently was host of the mobile app version of Who Wants to be a Millionaire.  This fall, she will continue as host of Amazon's flagship football show, NFL Now.  Previously, Adams hosted numerous red-carpet events where she interviewed A-list celebrities including Demi Lovato, Jon Hamm, and Paul Rudd, among many others. She has also appeared as a special correspondent and guest host on EXTRA and E! News.

Jackson is an award-winning journalist, host, and public speaker. Before joining PEOPLE, he was a host of NBC News' Stay Tuned, for which he received a Digiday Award. Prior, he was a host of MTV's Total Request Live reboot. His on-air journey began as a host of Revolt TV, Sean "Diddy" Combs' music cable network. Jackson has interviewed many celebrities throughout his career including Michael Phelps, Cardi B, Liza Koshy, Kevin Durant, and Oprah Winfrey.

For the past six years Jeremy Parsons has co-hosted PEOPLE Now, the popular daily online show that streams live on PEOPLE.com, Twitter, and Facebook Live. Parsons was also a fixture on the PEOPLE & EW Red Carpet Live shows that streamed during major awards shows including the Oscars, Emmys, Grammys, and SAGs, where he interviewed A-listers including Robert De Niro, Brad Pitt, Viola Davis, Morgan Freeman, Rami Malek, and many more.

Sandra Vergara is a television host, lifestyle authority, and beauty expert. Most recently, she co-hosted Yahoo's digital series, Hook'd, and was a regular contributor to Yahoo! Lifestyle digital. Prior, she co-hosted E!'s Good Work alongside Ru Paul and was the primary host for Yahoo's trivia app Pop Play. She also has a theatrical career and can be seen guest-starring in shows such as CSI, Bold and the Beautiful, and Nip/Tuck, as well as starring alongside Colin Farrell in the feature Friday Night.

ABOUT MEREDITH CORPORATION
Meredith Corporation has been committed to service journalism for more than 118 years. Today, Meredith uses multiple distribution platforms – including broadcast television, print and digital – to provide consumers with content they desire and to deliver the messages of its advertising partners. Meredith's Local Media Group includes 17 television stations reaching 11 percent of U.S. households. Meredith's portfolio is concentrated in large, fast-growing markets, with seven stations in the nation's Top 25 and 13 in Top 50 markets. Meredith's stations produce approximately 700 hours of local news and entertainment content each week and operate leading local digital destinations.

ABOUT PEOPLE
Meredith Corporation's PEOPLE revolutionized personality journalism when it launched as a weekly in 1974 with a mission to celebrate extraordinary people doing ordinary things and ordinary people doing extraordinary things. Ubiquitous and still at the center of pop culture more than 45 years later, the PEOPLE brand is accessible across all media and platforms (print, digital, video, OTT, mobile, social) bringing more than 100 million consumers a unique mix of breaking entertainment news, exclusive photos, video, unparalleled access to the red carpet, celebrities, and in-depth reporting on the most compelling newsmakers of our time. An essential component of PEOPLE's editorial vision remains human interest stories, which touch and often mirror the lives of our passionate audience. ComScore ranks the PEOPLE/Entertainment Weekly Digital Network No. 1 in the entertainment news category. PeopleTV, the advertiser-supported OTT streaming service from PEOPLE and Entertainment Weekly that launched in 2016, features original series and specials focusing on celebrity, red carpet, pop culture, lifestyle and human-interest stories. PEOPLE is an award-winning 24/7 news organization headquartered in NYC with reporters worldwide. For more information visit PEOPLE.com and follow @people on Twitter and Instagram, @peoplemag on Facebook, and the PEOPLE channel on YouTube and on Snapchat's Discover. 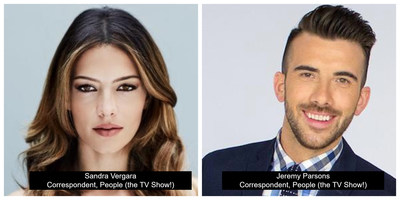