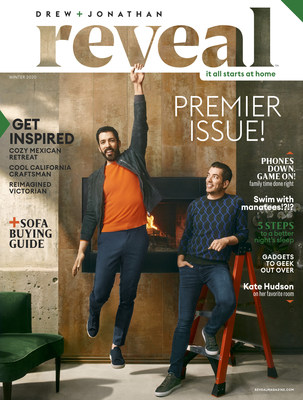 "Our vision for Reveal from the beginning has been to share what lies beyond the front door, under the rug, and behind the curtains," said Drew. "We believe it all starts at home, and want to offer simple steps to get more out of home and life."

Adds Jonathan, "We'll highlight incredible design talent from the most unexpected places, and spotlight stories of everyday heroes we admire. We still get so excited right before we open the doors to reveal a family's new dream home and this magazine gives us that feeling, too."

Reveal features bold photography and a heavy paper stock, as well as premium advertising across categories from ADT, Arm & Hammer, B&G Foods, Delta, Kohler, Marvin, Tyson, and other premium marketers. With a set limit, advertising in the issue was sold out.

"We're excited to launch the new year with this empowering brand from the lively Scott brothers and get it into consumers' hands," said Doug Olson, President, Meredith Magazines. "The advertiser interest has been overwhelmingly positive, and we expect the consumers to be equally enthusiastic about the product."

The issue's cover price is $9.99 and has an initial newsstand print run of 750,000. Meredith has already begun selling annual subscriptions of four issues for $20 and biannual subscriptions for $30. Consumers interested in subscribing can do so at Magazine.Store/Reveal.

ABOUT SCOTT BROTHERS GLOBAL LLC
Scott Brothers Global and its founders, Drew and Jonathan Scott, are the creators behind some of the world's leading lifestyle and entertainment brands and companies. Scott Living is their rapidly expanding collection of indoor furniture, décor, textiles and bedding, which is currently available at a variety of North American retailers, including Amazon, QVC, Michaels, Wayfair, Lowe's and Kohl's.

Drew and Jonathan are hosts and producers of multiple top-rated HGTV series, including the Emmy-nominated and Canadian Screen Award-winning Property Brothers, Brother vs. Brother and Property Brothers at Home. Produced by their production company, Scott Brothers Entertainment, their shows are enjoyed by millions of viewers in over 160 countries. In addition to their shows and home collections, Drew and Jonathan Scott are New York Times and Wall Street Journal bestselling authors and the founders of Casaza, an online design inspiration platform. Earlier this year, they launched their internationally popular mobile game, Property Brothers Home Design.

ABOUT MEREDITH CORPORATION
Meredith Corporation has been committed to service journalism for 117 years. Meredith uses multiple distribution platforms—including broadcast television, print, digital, mobile and video—to provide consumers with content they desire and to deliver the messages of its advertising and marketing partners. Meredith's National Media Group reaches 185 million unduplicated American consumers every month, including over 90 percent of U.S. Millennial women. Meredith is the No. 1 magazine operator in the U.S. and owner of the largest premium content digital network for American consumers. Meredith's Local Media Group includes 17 television stations, reaching 11 percent of U.S. households.