NEW YORK, June 1, 2021 /PRNewswire/ -- Meredith Corporation's PEOPLE, the No.1 brand in the United States celebrating popular culture, announces the second edition of a new quarterly publication focused exclusively on all things Royal. The Summer 2021 issue of PEOPLE Royals hits newsstands nationwide on Friday, June 11 for 12 weeks. The tag line "majesty, glamour, inspiration," displayed on the cover, touts Princess Diana in honor of her 60th birthday as "The Woman Who Changed Everything." It explains how her extraordinary life reshaped the monarchy and set the path for her sons William and Harry today.

'PEOPLE ROYALS' SUMMER ISSUE FEATURES
PRINCESS DIANA IN HONOR OF HER 60TH BIRTHDAY:
'THE WOMAN WHO CHANGED EVERYTHING'

The 96-page premium publication's newsstand price is $12.99 US/$15.99 Canada and is also available via annual subscription (four issues; $20) or two-year subscription (eight issues; $30) at peopleroyals.com/launch. Each cover story focuses on a different member of the Royal family and offers a rich look into his or her untold story -- from the debut Spring 2021 issue, which featured Royal mom of three Princess Kate and future King Prince William -- to American Royal Meghan Markle and Prince Harry, and more. With a chic, modern design, and expert insights that only the editors of PEOPLE can provide, this quarterly perfect-bound publication is a coveted collectible for Royals fans. In fact, the Spring issue of PEOPLE Royals was the most-read publication on Apple News+ -- right behind PEOPLE's weekly edition.

Features in the Summer Issue of PEOPLE Royals include a first-person essay, That Time I Met…Queen Elizabeth, written by former First Lady Michelle Obama.  She writes: "Whether it was that first visit to Buckingham Palace [in 2009] or our final trip to the UK as President and First Lady – when Prince Phillip chauffeured us from the helicopter landing pad back to Windsor Castle – we'll cherish the moments we've shared with the Queen and Prince Phillip. Not just because of their place in history or the grandeur of the setting, but because of the window they offered us: a lesson in being symbols and heads of state, while staying true to ourselves." Also featured:

PEOPLE's vast audience has had an insatiable appetite for the Royals over the years. In fact, Princess Diana has appeared on the cover of PEOPLE 58 times -- more than any other subject in the brand's history. In 2017 PEOPLE partnered with ABC on "The Story of Diana," a two-night television event that marked the 20th anniversary of Princess Diana's tragic passing at 36 years old. The documentary debuted to impressive ratings and won the two-hour timeslot over two consecutive nights, which led to another two-night ABC documentary the following year called "PEOPLE Presents the Royals." And back in 1997, PEOPLE purchased at Christie's auction in New York one of Princess Diana's famous Jacques Azagury dresses, which was subsequently donated to the New-York Historical Society in 2015 and is now a part of the museum's permanent collection.

About PEOPLE
Meredith Corporation's PEOPLE revolutionized personality journalism when it launched as a weekly in 1974 with a mission to celebrate extraordinary people doing ordinary things and ordinary people doing extraordinary things.  Ubiquitous and still at the center of pop culture more than 47 years later, the PEOPLE brand is accessible across all media and platforms (print, digital, video, OTT, mobile, social) bringing more than 100 million consumers a unique mix of breaking entertainment news, exclusive photos, video, unparalleled access to the red carpet, celebrities, and in-depth reporting on the most compelling newsmakers of our time. An essential component of PEOPLE's editorial vision remains human interest stories, which touch and often mirror the lives of our passionate audience. ComScore ranks the PEOPLE/Entertainment Weekly Digital Network No. 1 in the entertainment news category. PeopleTV, the advertiser-supported OTT streaming service from PEOPLE and Entertainment Weekly that launched in 2016, features original series and specials focusing on celebrity, red carpet, pop culture, lifestyle, and human-interest stories. PEOPLE (the TV Show!), a daily syndicated entertainment program, launched in Sept. 2020, PEOPLE Every Day, a daily podcast produced in associated with iHeartMedia, launched in Feb. 2021, and PEOPLE in the '90s, a weekly podcast about the golden era of pop culture, launched in June 2021. PEOPLE is an award-winning 24/7 news organization headquartered in NYC with reporters worldwide. For more information visit PEOPLE.com and follow @people on Twitter and Instagram, @peoplemag on Facebook, and the PEOPLE channel on YouTube and on Snapchat's Discover. 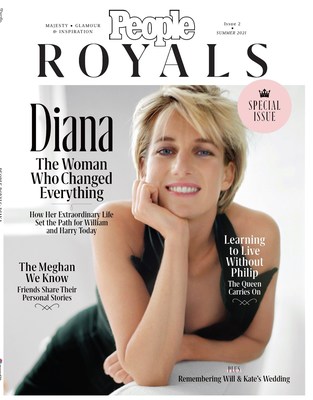