NEW YORK, June 2, 2021 /PRNewswire/ -- Meredith Corporation's (NYSE: MDP) FOOD & WINE announces that its newest video series Pastries with Paola debuts today. In this lighthearted new weekly show, celebrated pastry chef and James Beard Award finalist Paola Velez, who is known as much for her meaningful social justice work as for her mouthwatering Instagram posts and dances on TikTok, shows viewers how to make comforting baked goods and desserts that celebrate her Dominican heritage and inspire fun culinary adventures in the kitchen. 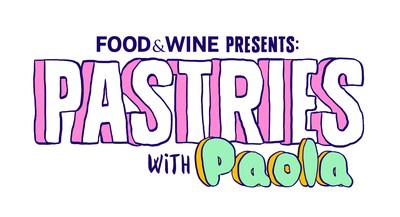 With 13 episodes planned for its debut season, Pastries with Paola airs across FOOD & WINE's Instagram, YouTube, and Facebook channels, as well as on Foodandwine.com, which will also feature each of Paola's recipes so viewers can easily create her dishes at home. The first episode features Paola's Maria Cookies Icebox Cake. Other recipes to be highlighted in upcoming episodes include Cornbread Tres Leches, Cherry Empanadillas, Lemony Sumac Pie with Ritz Cracker Crust and the Ultimate Chocolate Party Cake, among others.

Amanda Dameron, Chief Digital Content Officer of Meredith, said, "As we grow our video offerings across brands and channels, I'm thrilled to introduce this new FOOD & WINE series with Paola Velez. An incredible talent who brings joy, deep culinary expertise and a singular point of view, Paola's enthusiasm is contagious. I know that our audience will love spending time cooking with her and hearing the stories behind some of her favorite recipes that reflect her heritage and culinary traditions."

Raised in the Dominican Republic and the Bronx, Paola grew up with access to almost every exotic fruit imaginable which led her to become an advocate for equitably sourced food and sustainability. She uses her time and resources to help her communities and the restaurants she works with make impactful change. A James Beard Rising Star-nominated pastry chef, Paola is the founder of La Bodega Bakery, executive pastry chef of Maydan and Compass Rose in Washington, D.C., and co-founder of Bakers Against Racism. A graduate of Le Cordon Bleu, Paola got her start in the culinary industry working with Jacques Torres, and then went on to work with Christina Tosi at MilkBar. Following that, she held several positions at notable D.C. restaurants including Lead Pastry Cook at Arroz, Pastry Chef at Neighborhood Restaurant Group's Iron Gate Restaurant, and Executive Pastry Chef of Kith/Kin.

Paola said, "I'm super excited to partner with FOOD & WINE for this series, not only for the opportunity to talk about food and ingredients that resonate with so many first generation Americans from the diaspora, but also to have the chance to talk about some of my dearest food memories from New York. It's super important for me to be able to represent cultures and communities that I see myself in, and I'm excited to be an example for those who are growing up or living in places like the Bronx of what is possible. And, I'm hoping that through this series, people will learn just how fun and easy baking can be!"

Pastries with Paola joins FOOD & WINE's collection of video series that includes Chefs at Home which launched its second season in May and features star chefs such as Maneet Chauhan, Katie Button and Brandon Boudet making some of their favorite dishes in their own kitchens; Bottle Service, hosted by FOOD & WINE's Executive Wine Editor Ray Isle, featuring conversations with celebrities about wine, spirits and more; Mad Genius, hosted by FOOD & WINE Culinary Director at Large Justin Chapple who shares his inventive approach to cooking with fun tricks and advice; and the long-standing F&W Cooks, which features a network of food pros delivering the most cookable recipes and delicious ideas. FOOD & WINE's special three-part video series Tasting Home featuring Kwame Onwuachi was recently nominated for a 2021 ASME award.

Paola was interviewed on FOOD & WINE's Communal Table podcast in June 2020, and that episode is available here.

FOOD & WINE is the ultimate authority on the best of what's new in food, drink, travel, design, and entertaining. FOOD & WINE has an extensive social media following on Facebook, Twitter, Instagram, Pinterest, and YouTube. FOOD & WINE includes a monthly magazine in print and digital; a website, foodandwine.com; a books division; plus newsletters, clubs, events, dinnerware, cookware, and more. At FOOD & WINE, we inspire and empower our wine- and food-obsessed community to eat, drink, entertain, and travel better—every day and everywhere. FOOD & WINE is part of Meredith Corp.'s (NYSE: MDP: Meredith.com) portfolio of best-in-class brands.