NEW YORK, Feb. 24, 2022 /PRNewswire/ -- Dotdash Meredith announces the debut of a special edition magazine from The Home Edit that's filled with fresh tips, tricks, and insider secrets to help readers organize their homes and make their lives better in the process. Bringing The Home Edit's signature approach to organizing to its pages with real-life projects and tons of design, décor and lifestyle ideas from founders Clea Shearer and Joanna Teplin and the entire The Home Edit team, The Home Edit: Feel-Good Organizing special issue is available now at Magazine.Store and on newsstands nationwide on March 4. 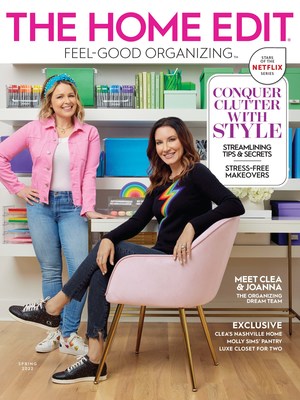 "We're thrilled to publish our first special edition magazine that highlights what we love about The Home Edit community. Sure, it's about organizing, of course, but it's also about celebrating the things that make you happy—even if you're just discovering them for the first time," said Clea and Joanna.

Highlights of the Spring 2022 issue of The Home Edit: Feel-Good Organizing:

"Teaming up with The Home Edit to bring their vision to the pages of this special issue has been an amazing adventure," said Scott Mortimer, SVP/Group Publisher of Dotdash Meredith. "We know that their many fans all across the country will love The Home Edit: Feel Good Organizing—as well as anyone looking for clever ideas and inspiration to make the most of their spaces while having some fun along the way."

With a cover price of $14.99, The Home Edit: Feel-Good Organizing special issue magazine is available on Magazine.Store and other online retailers now and will be available on newsstands across the country on March 4. For more about The Home Edit, visit thehomeedit.com.

A second special newsstand issue from The Home Edit is planned for Fall 2022.

About The Home Edit
The Home Edit was founded in 2015 by Clea Shearer and Joanna Teplin. Brought together by a mutual friend, it was friendship at first text, and a business partnership immediately thereafter. The goal in starting The Home Edit was to reinvent traditional organizing, and merge it with design and interior styling for a specific and signature look that is now known across the globe. Since the company's inception, the business has grown into over 9 markets spanning the United States. Clea and Joanna are also the authors of two New York Times' bestselling books, The Home Edit and The Home Edit Life; are the stars and executive producers of the Emmy-nominated Netflix show, "Get Organized with The Home Edit" and have a line of organizational products sold in over 15 countries.

About Dotdash Meredith
Dotdash Meredith is the largest digital and print publisher in America. From mobile to magazines, nearly 200 million people trust us to help them make decisions, take action, and find inspiration. Dotdash Meredith's over 40 iconic brands include PEOPLE, Better Homes & Gardens, Verywell, FOOD & WINE, The Spruce, Allrecipes, Byrdie, REAL SIMPLE, Investopedia, and Southern Living. Dotdash Meredith is based in New York City and is an operating business of IAC (NASDAQ: IAC).