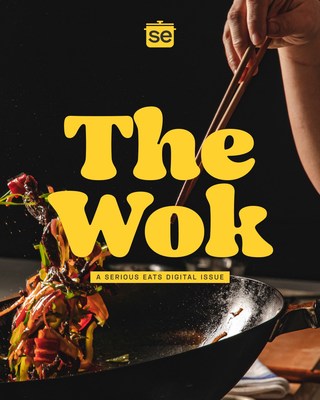 "When we sat down to figure out the theme for our first digital issue, we realized it was slated for publication at the same time as the release of The Wok, the second culinary opus from Kenji López-Alt, our former colleague and food-science wunderkind," says Daniel Gritzer, Senior Culinary Director and Tess Koman, Senior Editorial Director of Serious Eats in their Editors' Letter. "One thing we all felt strongly about was that, while Kenji would play a leading role in this digital issue, contributing an introductory essay, two original recipes, and a wok-science excerpt from his book, the Serious Eats Wok Issue is about more than Kenji's amazing new book—the wok's roots run too deep and its reach is too broad for us to share one person's story alone." Read the complete Editors' Letter here.

Serious Eats' premiere digital issue celebrates China's deep culinary traditions in wok cooking and also showcases the wok's influence across cultures, with Thai, Japanese, and Taiwanese recipes. Additionally, Serious Eats goes on location in China to explore two possible futures for wok production: one, a revival of its ancient hand-hammered roots, and the other, a robotic revolution in the form of "auto-woks."

The issue includes two profiles of impressive women who have made their mark advancing wok cooking: Tane Chan, the pioneering owner of San Francisco's The Wok Shop and cookbook author and "wok therapist" Grace Young. In Grace's interview, she tells of a past fiasco in which years of beautiful seasoning on a cherished wok were stripped away by a well-intentioned but unaware helper: "I always tell that story to show people that when you start cooking with a wok—protect it. Don't let your spouse or partner or best friend wash your wok. Just make it really clear to everyone that you're taking care of your wok. I never leave my wok anywhere overnight when I travel; it will always come back to the hotel room with me."

Highlights from "The Wok: A Serious Eats Digital Issue":

Serious Eats is an award-winning food and drink website visited by over 7 million hungry readers every month. Our audience comes to us for rigorously tested recipes, science-driven cooking techniques, robust equipment reviews, and stories that offer cultural and historical context to the foods we love to eat. Since it was founded in 2006, Serious Eats's editorial staff and contributors have included recipe developers, practiced home cooks, professional chefs, scientists, historians, journalists, photographers, novelists, and more. Members of our editorial team come from publications like America's Test Kitchen, Food & Wine, The New York Times, and Saveur; most have also worked in the restaurant industry and/or attended culinary school. Across the board, we're a group of passionate, opinionated food enthusiasts with a drive to dive deep, get things right, and do justice to any topic we take on. Serious Eats is part of the Dotdash Meredith publishing family.