NEW YORK, June 14, 2022 /PRNewswire/ -- Dotdash Meredith's FOOD & WINE announces the 2022 Game Changers, recognizing 16 people and organizations who are driving the culinary world forward and transforming the way we eat and drink for the better. From chefs, restaurateurs, entrepreneurs, and winemakers to activists, relief organizations, and companies creating innovative products, the leaders and visionaries named to the second-annual FOOD & WINE Game Changers list are featured in the July issue of FOOD & WINE and at foodandwine.com/gamechangers. 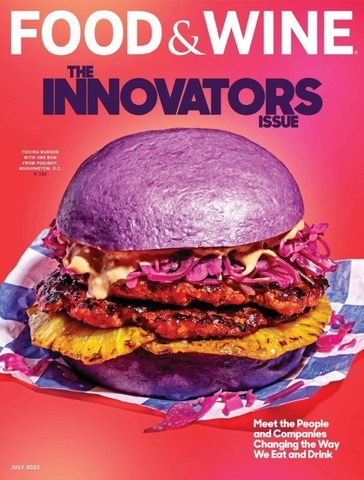 FOOD & WINE Editor in Chief Hunter Lewis wrote in the July issue: "Once a year, we devote an entire issue to innovation on a grand scale, spotlighting the leaders who are doing the most good to change the way we eat and drink. You'll find them in our second-annual F&W Game Changers list, featuring 16 people and companies who are making hospitality and packaged goods smarter, more sustainable, more inclusive, and more delicious for all. People like Dwyane Wade, the NBA star who's helping make sure the future of wine is a diverse one, and Birgit Cameron, who launched Patagonia Provisions to help fight climate change through food."

Bringing the special July Innovation issue of FOOD & WINE to life, the theme of this year's FOOD & WINE Classic in Aspen, taking place June 17–19, is the Summit of Innovation. The event will feature several 2022 FOOD & WINE Game Changers, including Dwyane Wade and Yannick Benjamin, as well as Chintan Pandya and Roni Mazumdar, who will pop up their Rowdy Rooster restaurant and serve their fried chicken sandwich spiced with chaat masala in the Grand Tasting Pavilion.

About FOOD & WINE
FOOD & WINE is the ultimate authority on the best of what's new in food, drink, travel, design, and entertaining. FOOD & WINE has an extensive social media following on Facebook, Twitter, Instagram, Pinterest, and YouTube. FOOD & WINE includes a magazine in print and digital; a website, foodandwine.com; a books division; plus newsletters, events, and more. At FOOD & WINE, we inspire and empower our wine- and food-obsessed community to eat, drink, entertain, and travel better—every day and everywhere. FOOD & WINE is part of the Dotdash Meredith publishing family.